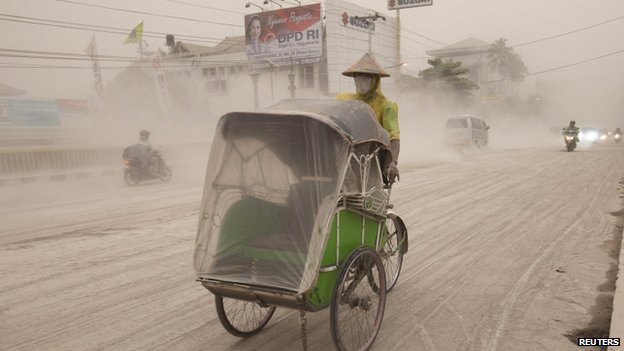 Thousands of people are evacuating their homes in Indonesia after a volcano erupted in east Java.
Mount Kelud,an active volcano in Indonesia, spewed ash and debris over a large area, including the city of Surhttp://www.bbc.co.uk/news/world-asia-26183880abaya, about 130km (80 miles) away.
Two people died after their houses collapsed under the weight of ash, officials said. Some towns were said to be covered by 4cm (1.6 in) of ash.
Three major airports in Surabaya, Solo and Yogyakarta were forced to shut down because of low visibility.
There are also fears that debris could damage aircraft engines.
Andi Wirson, general manager at the Yogyakarta airport, said: "The current conditions are that volcanic ash is now covering the runway, apron and tarmac. We have already measured the thickness of the volcanic ash, which is at 5cm on the runway and tarmac."
Site URL: http://www.bbc.co.uk/news/world-asia-26183880

One thing is that they had the same amount of ash as we got snow. If you wantid to you can eat the snow, but cant eat the ash. People did not wanted to leave their homes, because there are a lot of active volcanoes near there and they are used to them, also there nothing in the shelters.

Email ThisBlogThis!Share to TwitterShare to FacebookShare to Pinterest
Labels: WEATHER